Hidden away across a landscape of lava rock and a sea of smoke billowing up from the ground,  is a geothermal energy facility.   According to Wikipedia “The spa is located in a lava field in Grindavík on the Reykjanes Peninsula, southwestern Iceland. Bláa lónið is situated approximately 20 km (12 mi) from the Keflavík International Airport and 39 km (24 mi) from the capital city of Reykjavík, roughly a 21-minute drive from the airport and a 50-minute drive from Reykjavík.”

The water is renewed almost every two days and stays between 98-104 degrees Fahrenheit or 37-40 C all year round.

The plant produced “waste water” that appears blue due to the silica and minerals in the water.   At some point between 1976 and 1981, someone decided to go into the waste water and bathe in it.   Most people overlook this fact.   Someone at some point in time traveled to this area literally miles from everything and decided to take a dip in electric blue hot waste water. 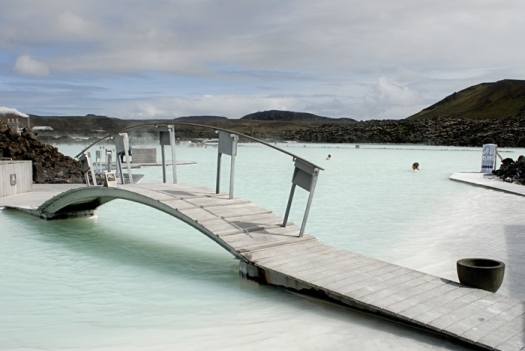 The blue lagoon is so popular today, if you don’t reserve a spot there is a good chance you will not get in.   The prices range from $61.00 to over $500.00 just to get in and have a dip.    The place is jam packed and open until midnight in the summer time.  Since Iceland has perpetual light in the summer time,  it is bright out and inviting through the whole day.

The place is growing as well.  They are building private areas and expanding the hotel and luxury environment.    This has become one of the most popular tourist attractions in the world.

This growth and expansion is based on waste water.   As tourism is increasing in Iceland in ways that their current infrastructure has to grow exponentially to support, there are more demands for energy as well.   This system is feeding itself and growing.   Iceland is becoming a very popular travel destination.

Something to note, at any given time over between 20 and 40% of the people in Iceland are tourists.    Iceland is also getting heavily involved in cloud computing.   Think about it,  low power costs,  low costs for cooling data centers makes for low cost data centers.

Bitcoin farming / mining is cheap and since the infrastructure already exists,  this place is primed for the future.

Icelandic people are also innovating in other ways.   People are starting to use electric cars and they also charging for micro-services including in some places charging for the use of a bathroom.

I think Iceland is country to watch.   I don’t have any predictions but as one European tourist said to me in casual passing “Howie,  we came here because we think this is a great place to go with very little chance of terrorism.”      Seems like Iceland has many appealing qualities including safety, openness for sexuality,  growing infrastructure and they are innovating to make the country perpetually attractive.

Now the only thing left for them to do is keep the ISK in check ..

5 Replies to “Innovation in Iceland”