Christmas Day is 20 days from now.  I wish for you and your loved ones a very Merry Christmas.  It is a very special time of the year when even salty old dogs like me enjoy the magic the season brings.  What is your favorite Christmas holiday song?  My wife’s favorite is “Silent Night”.

Although I enjoy Faith Hill’s version of “Where are you Christmas”, ever since that period on active duty where I spent five consecutive Christmas holiday’s deployed, my favorite has been, “I’ll be home for

Christmas”.   Thank you for your friendship and goodwill during the past

year. I wish you a wonderful holiday season and a New Year full of happiness and prosperity.

It is cold here now.  Attached, you will find a couple of photos of the Hindu Kush Mountains that completely surround us.  With the snow on them, one could say they are pretty.  I guess there is beauty in hell.

However, bad people constantly shoot rockets and mortars at us from those hills so they will never be pretty to me. The photo of the vehicle, MRAP, is to show their tremendous size.  I honestly do not know if those vehicles are the correct solution to the IED threat.  I do know MRAPs are used throughout this Theater. I am grateful our Soldiers, Sailors, Marines, Air Force and Coast Guard men and women who ride in them are safer during the accomplishment of their missions while in

On the 18th of December, I will be at my 1/2 mark.  Time still passes much too quickly even in hell.  Consolidating the daily situational reports of the past 24 hours of kinetic events draws a physiological toll and worries me a bit. The figures on deaths, loss of limbs and other serious wounds, to all sides, has crept into and affected the dark and black section of my heart.  I have learned to hate the Taliban and all who support them.  Hate is not healthy for it negates the ability to forgive. The Taliban seriously just need killing.  Unfortunately, we will not be able to kill enough of them to allow the current Afghan military and police force to protect the peoples of this geographical area before the United States and Coalition Partners depart these miserable lands.  I did not call Afghanistan a country, for the tribes in the hills do not recognize Afghanistan as a nation state.  That is both bad and good.  The bad part has to do with the party line “strategic objectives” that justified the US and ISAF to come to these lands in the first place.  Bottom line, my opinion and my opinion only, those objectives will not be accomplished.  Unfortunately, the loss of National Treasure combined with the fiscal costs of this and the Iraq war has contributed to the fiscal disaster facing our Nation.  In the end, those costs will be for such little good or strategic gain.  The good news is that these mountain tribes are the true strength of the peoples within these lands.  Since recorded history, no power, either inside or outside, has ever subjugated or ruled the mountain tribes collectively.  Neither will the Taliban.

There was a recent nasty multiple car-bombing on a forward operating base not far from here.  So compared to the men and women lying in the field hospital beds a few hundred yards from where I am typing this note, all is well.  I am in need of nothing.  I am healthy.  I am happy.

Over the years, I have traveled in sixty-five countries, led men in combat, been shot at and cut with a knife, but I have never been alone because of the reason Christmas is celebrated; I remain grateful for the Lord’s Grace and His Son. There is no finer gift to receive than that. 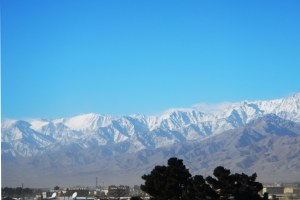